GSG is thrilled to acknowledge the service of Jim ZAKNICH (Investigator) and Arnold ZOETHOUT (Security Officer), who have both recently celebrated ten years of service with Gold Security Group (International) Pty Ltd.

Low staff turnover is one of our benchmarks within GSG and the Directors were pleased to invite Jim and Arnold to join them in the boardroom for the presentation of their "gold watches" to mark this special occassion.

Jim is married to Pat and was in the WA Police about 20+ years rising to rank of Inspector.  He resigned to become the Director Consumer Protection at Ministry of Fair Trading (now Dept of Commerce), later appointed Head of Building & Construction Task Force (under former Liberal minister Graham Kierath) until a change of government.  He was an elected Councillor at Shire of Mundaring for about 6 years. After retiring, and getting bored, he joined GSG as an investigator.  Where does 10 years go?

Arnold is married to Hetty and was in the WA Police for about 30 years and retired at rank of Inspector.  Being an ex-traffic man he was used to dealing with people and didn’t wait too long to join GSG.  He moved into security  predominantly at Edith Cowan University.  Has worked at all campuses and in more recent times has been covering shifts at the Claremont campus (now UWA), although he has provided back stop services whenever and wherever staffing crises occur.

We extend our congratulations to Jim and Arnold and look forward to the next ten years! 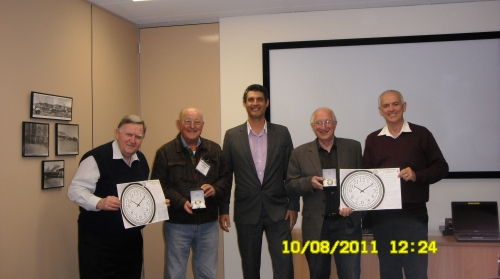