As we continue our introduction to some of our key staff on site, we introduce Tony LINDSAY. 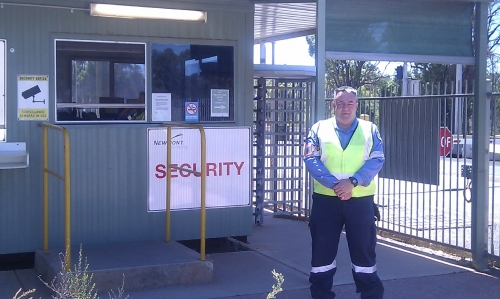 Tony has been with Gold Security Group (International) Pty Ltd since 2007 and has worked as a security officer in the Pilbara region and now on one of our major south west construction and mining sites.
Tony has come to GSG with a broad background of experience having had Policing experience in a variety of areas.
During this time with GSG, Tony has completed a number of security, safety and emergency response courses adding to his already impressive list of competencies and qualifications. He has worked closely with Emergency Response Teams and has been a judge at some of the major emergency response competetions. He is currently studying at ECU for a Bachelor of Counter Terrosim.
Tony is now the GSG Security Supervisor on a major site in the south west of Western Australia.
He has achieved many milestones in this position including the security operations for the opening ceremony of the site, major VIP visits to the site, commissioning security systems and procedures along with overseeing major plant shut downs.
Tony manages a team on site that has achieved success that is a reflection on their dedication and collective abilities.
Tony is a valued leader on site and has integrated well with both GSG staff and client staff alike, attaining a high level of respect